PRODUCT
ELECTRIC VEHICLE AND BEYOND

WHO WE ARE
FOUNDER'S WORDS: ARQBRAVO

VISION AND MISSION
KNOW OUR PURPOSE

ROADONERS COMMUNITY
LET'S DO BUSINESS TOGETHER!

ArqBravo Group, dedicated to Sustainable Mobility, offered our BONDI System to give structural, design and support services to HYPERLOOP (energy for operation of 100% renewable sources, plus the necessary accumulation for continuous operation, connected to the smart grid), integrating our other systems of medium and short distance to solving the problem of the last mile. Press release (spanish)

Translate: American entrepreneur Elon Musk is known as the founder of the electronic payment system PayPal, which turned him into a millionaire. But to car fans he is more known as the founder of Tesla Motors, the revolutionary automotive company from Sillicon Valley that has brought comfort, design and high performance to the world of electric vehicles with their Tesla Roadster and Model S models.

But Musk isn't just obsessed in revolutionizing personal transportation, he also wants to promote commercial and private space flights (with his company SpaceX), and to forever change the ground mass transportation with the HyperLoop. The technical mastermind behind these two projects is the engineer Marco Villa, who has worked with Argentinean group ArqBravo in add their Bondi project to the network of services offered by the HyperLoop. ArqBravo is the automotive and innovation company founded by Argentinean architect Miguel Angel Bravo. Faced with barriers from the local government for the certification of his vehicles, ArqBravo decided in December 2012 to cancel his production plans in Argentina and to establish his company in the US. The work between ArqBravo Group and HyperLoop is the first major one that the Argentinian group accomplishes in the US, and was presented last week in California between Marco Villa, Technical Director of HyperLoop, and Eduardo Javier Muñoz, CEO of ArqBravo.

The HyperLoop and Bondi can be defined as follows.

* Hyperloop project: It's a kind of pressurized, very high speed passenger capsule, that moves inside a low pressure tube, over an air cushion, and that is moved by a combination of air compressors and electromagnetic motors. Because it travels inside a lower resistance environment, the capsule can reach a maximum speed of 1220 km/h (760 mph). The first part of the HyperLoop project will connect San Francisco and Los Angeles, covering the 570 km (350 miles) distance in 35 minutes, with an average speed of 962 km/h (600 mph). It will require and investment of over 6 billion dollars. 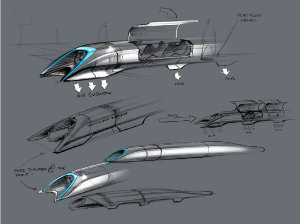 * Bondi project: The transport system envisioned by ArqBravo features a series of electric-powered elevated capsules, with stations that serve as recharging point via solar panels. These stations can provide the system with energy, but can also divert any excess power to the electric grid. Unlike other transportation means like subways and trains, the system has no fixed schedules but adapts dynamically to the number of passengers by increasing or reducing the number of capsules in circulation. The design for Bondi was a finalist for the Spark Awards 2013. 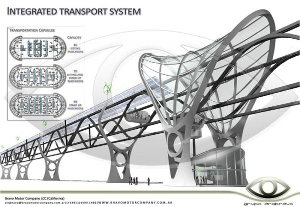 Autoblog had the opportunity of interviewing Marco Villa regarding the scope of HyperLoop and its work with ArqBravo Group.

CC: What is the HyperLoop and in which stage of development it is right now?

MARCO VILLA: HyperLoop has been defined as the 5th method of transportation and combines principles of ground, air and space transportation. It is essentially composed by a pod gliding inside an evacuated tube and accelerated/decelerated through magnetic forces. There are multiple groups tackling the problem and they are all at different stages of the feasibility phase.

CC: Which is the infrastructure the HyperLoop needs to work and which is the estimated investment?

MARCO VILLA: Pylons, tube and stations. The investment will likely be in the single digit for the entire program development + initial implementation.

CC: Which is your estimation in time to have a working HyperLoop?

MARCO VILLA: An early prototype should be in place as early as 2015.

CC: Which are the implications the work with ArqBravo Group?

MARCO VILLA: With the Bondi system, ArqBravo Group brings in an important piece that would allow to create an end-to-end transportation system covering local, regional and inter-regional needs.

CC: In which way Group ArqBravo`s Bondi project can complement the HyperLoop?

CC: There are many alternative mobility projects, which characteristics does the Bondi has in order to call your attention to be integrated to the HyperLoop?

MARCO VILLA: It has been designed to be energy neutral or positive and HyperLoop can take advantage of it. It already needs similar infrastructure (pylons) and the current design would allow the two systems to be collocated where needed.

CC: The HyperLoop is one in many projects for the future of mobility developed by Elon Musk, Tesla`s founder and CEO, which is your envision over the transportation means of the future?

MARCO VILLA: I cannot comment on Mr. Musk plans. In my personal opinion, the next decades will see an important shift in how humanity interacts with transportation systems, and the expectations will change dramatically. And these factors will be the driving force for a change, with new systems introduced at all levels.

The process of Design and Integration of both systems can be seen in this Album. 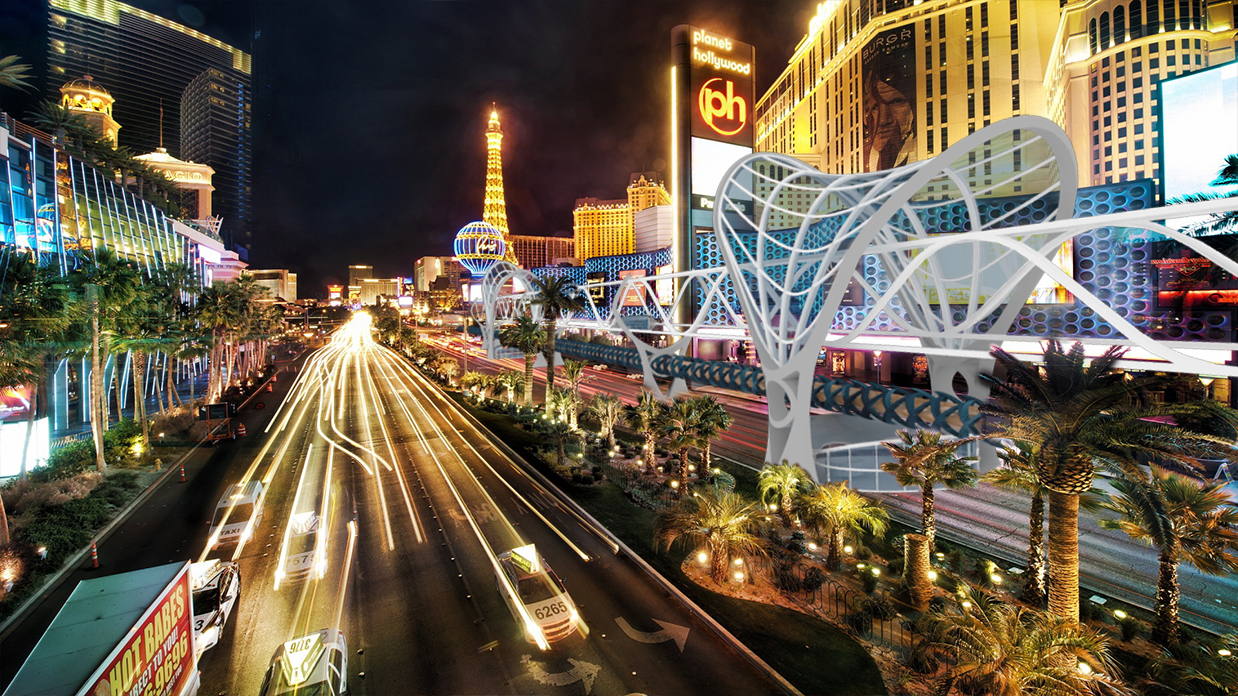 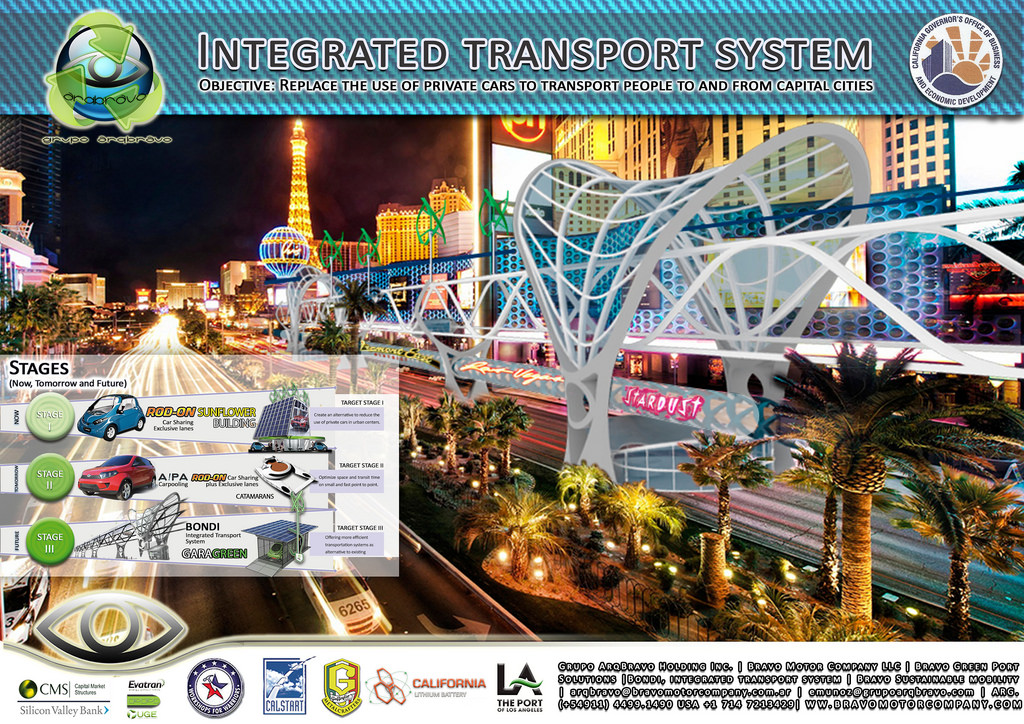 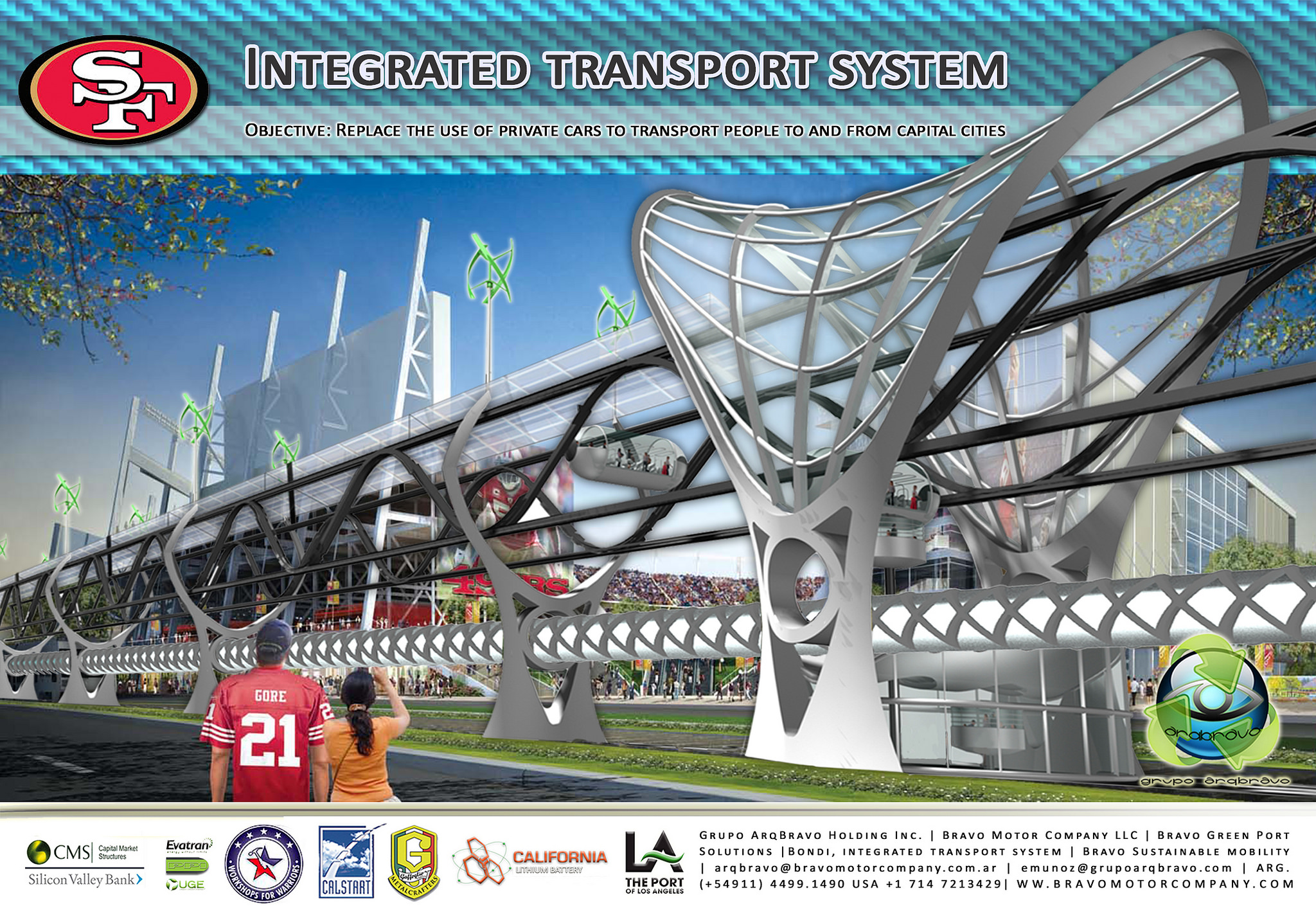 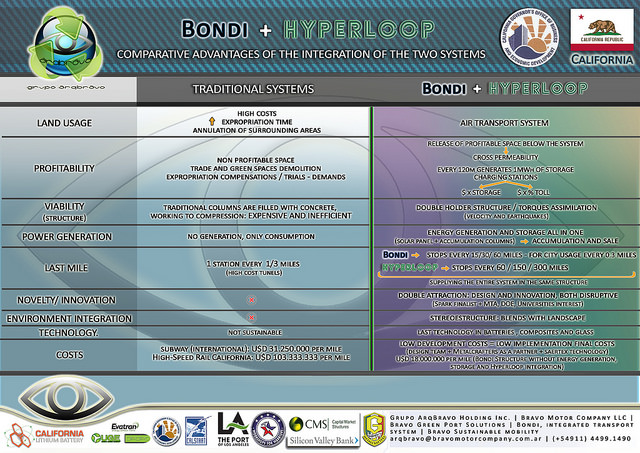 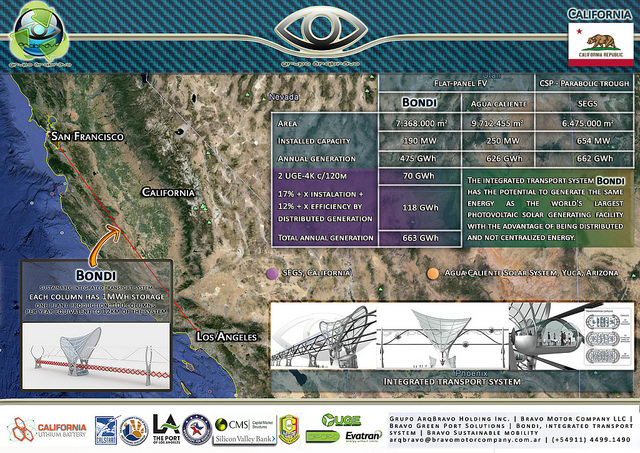